Top 10 Biggest Pope and Young Typical Bucks of All Time 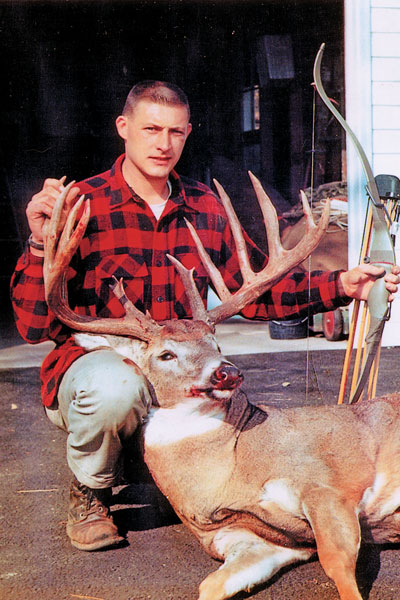 For many hunters, there is nothing like a perfect typical buck. The symmetry and design of tall, wide antlers that are equal on either side is definitely a sight to behold. It’s really hard to find a giant typical, and even harder to kill one with a bow. The 10 bucks below are the top 10 biggest pope and young typical bucks of all time and their photos and stories are worth checking out. 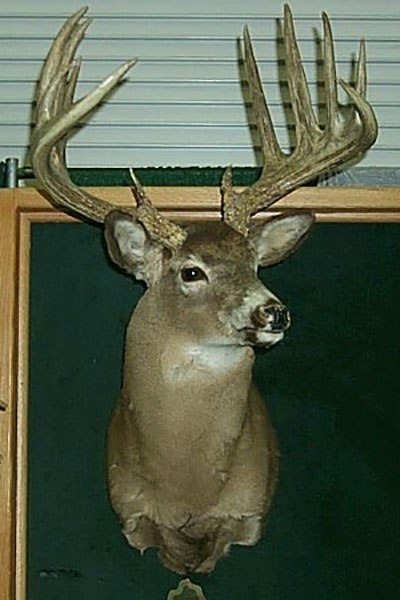 Robert Miller shot the 2nd largest typical, bow-killed buck in Iowa back in 1977

Robert Miller was hunting in Jones County, Iowa when he killed this massive 12 pointer back in 1977. Miller has killed several large bucks in Iowa, but this one scored an impressive 194 2/8 inches and is ranked as the second largest bow killed typical whitetail in the state of Iowa. 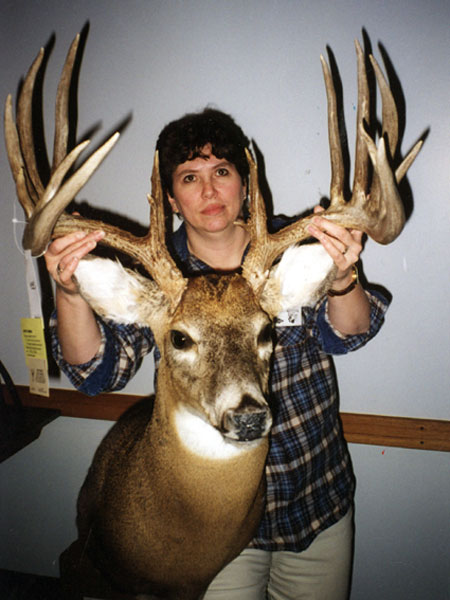 Kent Anderson’s monster whitetail came in at No. 9 on the Pope & Young Typical Whitetail list and it’s a big trophy. The buck was shot by a bow in 1999 and had 17 points, which is very impressive since it’s a typical. The main beams measured 27 and 29 inches, so it’s a very good deer. The buck scored an impressive 195 2/8 inches and is a dandy archery buck at 39 on the Top 10 Biggest Pope and Young Typical Bucks of all time. 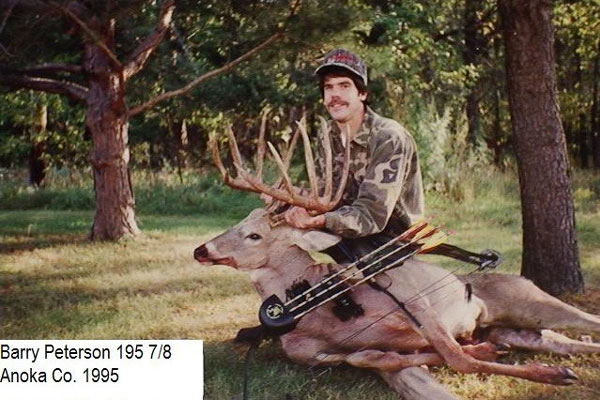 Barry Peterson shot this monster buck in 1995 in Colorado. The deer scored 195 7/8 inches and was the largest bow killed typical buck in 1995.

The summer of 1995 brought attention to Barry Peterson that he had a very big buck living on his hunting area. He scouted and formed a plan and on the opening morning of bow season he took a giant typical whitetail in Colorado. The buck scored 195 7/8 inches and was the largest bow-killed typical buck in 1995. It is #8 on the list of the Top 10 Biggest Pope and Young Typical Bucks of All Time. 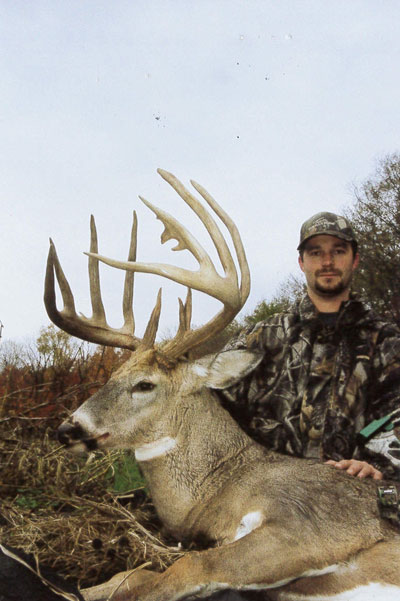 Justin Metzner took this great Ohio buck back in 2006 after driving three hours at 3 a.m. to his hunting grounds. Ohio has produced some dandies and this buck proves this state is definitely a trophy state. The deer scored an impressive 196 6/8 inches and was shot on October 21, 2006. It’s #7 in the list of the Top 10 P&Y Whitetails. 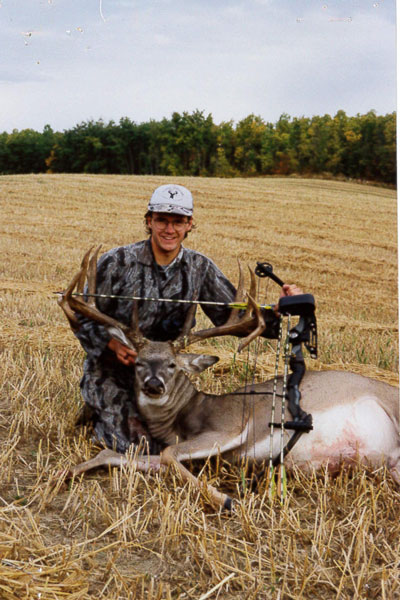 Don McGarvey shot this large whitetail buck in 1991 in Edmonton, Alberta. The deer had a 29 inch spread.

Don McGarvey is the winner of the number 6 spot on the list of the Top 10 biggest P&Y bucks of all time and he shot this great deer in Edmonton Alberta in 1991. The deer was killed on September 20 and sported a huge 29-inch spread. It was shot in what is called the “Edmonton Bow Zone”. This area is a 1,600 square mile tract of land in Alberta that is only open to bow hunters. 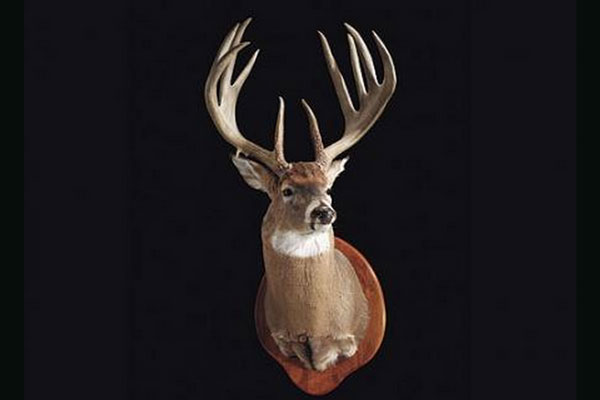 The 1986 archery season was a good one for Minnesota hunter Curt Van Lith. He chased a giant buck from 1983 to 1986 and finally was able to seal the deal in the 1986 archery season. The buck scored 197 6/8 inches and is one of the biggest typical bow kills ever. The deer features 11 points and almost 30 inch long main beams. It is tied for the fourth spot in the Top 10 biggest Pope and Young Typical Bucks of all time. 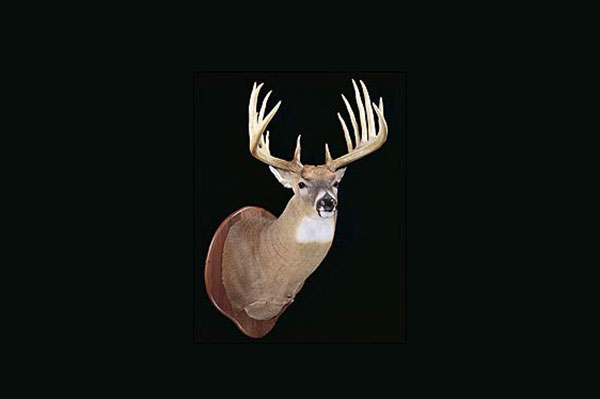 Lloyd Goad held the world record for the largest typical buck shot in 1962, but was later pushed out by a larger deer. He shot this behemoth with a recurve bow and wooden arrows.

Iowa has had some amazing bucks shot in it, but Lloyd Goad’s 1962 bow kill is one of the best ever shot there. The deer nets an incredible 197 6/8 inches and has a nearly perfect 7×7 frame. In 1962, when it was shot, it was the No. 1 Typical Bow kill in the world, but lost it’s spot four years later to Mel Johnson. The most impressive part was that it was shot with a recurve bow and wooden arrows. 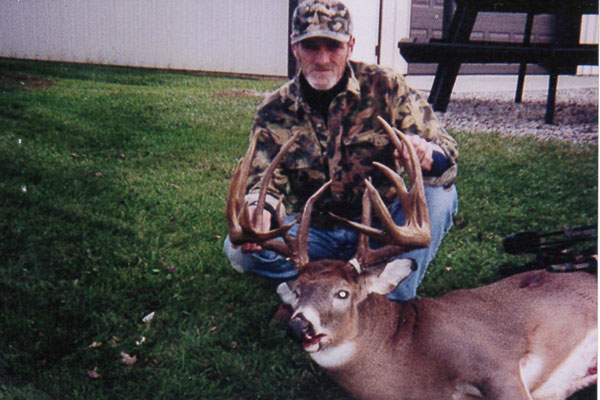 Tim Reed shot this massive buck in 2004 in Ohio on public ground. It is the third largest typical buck taken with a bow

The third highest scoring Pope and Young Typical buck of all time goes to Tim Reed, who killed his 198 3/8 inch buck in Ohio in 2004. The buck was shot on public ground in Muskingum County on November 10 and has a gorgeous 7×7 frame. The G2’s tally over 14 inches long and are absolutely incredible. 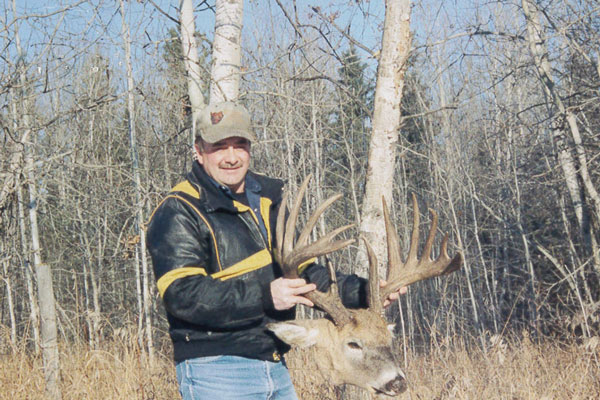 Hubert Collins shot this massive buck in Saskatchewan in 2003 and it ranks as the second largest typical buck shot by a bow and arrow ever.

The enormous buck shot by Hubert Collins in 2003 made waves across the whitetail world with rumors of a new potential world record Pope and Young. The long-standing record shot in 1965 was thought to have been beat, but in the end, Collins’ buck fell just short with a typical score of 203 3/8 inches. Collins shot this buck in Saskatchewan during a hunt that he was just hoping to kill a doe on. The deer has a 6×6 frame and an inside spread of 19 3/8 inches, showing how much mass this deer had.

This is the largest Pope and Young Typical Whitetail Buck ever shot. Mel Johnson took this 204 4/8 inch buck in Illinois in 1965.

One of the biggest and most iconic bucks ever shot in Illinois has to be the Mel Johnson buck. This deer has almost a 24 inch spread and 13 score able points. The buck scores a whopping 204 4/8 inches and is the largest Pope and Young Whitetail Buck ever shot.

Johnson shot this buck while using a recurve bow, on the ground, hiding in some brush in 1965. This is truly one of the most incredible hunts in history and was done the old fashioned way. It just goes to show you that all the gadgets and camo in the world are sometimes unnecessary.