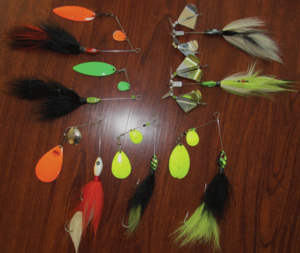 Let’s face it, it’s really what every musky fisherperson is seeking, right? Why else would we all spend so much time and money pursuing the king of freshwater? This article is going to cover TRANSITIONAL situations and hopefully help you get a little more M.P.H.—Muskies- Per- Hour– out on the water.

This is actually the only transition we can actually control. Lure speed can greatly affect our successes and failures. There have been many, many times when fish won’t even look at a lure if it isn’t moving at the certain speed they want it at. Sometimes, (generally in colder water temperatures) they prefer an ultra-slow presentation, with a generous amount of pauses during the retrieve where the lure isn’t even moving. Although I pointed to cooler water here, this can and often will occur in midsummer as well. Be versatile and always try different speeds! The best baits for the transitional situation in our boat are neutral buoyancy jerkbaits or walk the dog topwaters. It is tough to beat these two in this scenario. My wife, Tina, had an awesome boatside strike from a BEASTLY 48 ½ that came out of nowhere and crushed a Giant Jackpot as it lay totally motionless five feet from the boat. (see pic)   Water temp was 49 degrees and it demolished a topwater.

Then there is the opposite end of the spectrum when they want a nitrous fueled retrieve. We’ve had days (generally high water temps, but remember, be versatile!) when you simply couldn’t reel fast enough. There are lots of times when the term, “Speed Kills” certainly applies to musky fishing. This scenario will also allow you to cover a lot of water very quickly and game plan your hot spots accordingly. Long casts and fast retrieves will tell you a lot about the spots and the mood of the fish. If you are getting follows but no strikes, shift into an even higher gear and “make them” stop it if they want it. If more speed equals less or no follows, downshift slightly until you find the right gear they are looking for. It generally doesn’t take too long to figure out what mood they are in.

Lure selection for high-speed muskies will be dictated by what type of cover or structure you are fishing. Most open water will open up an endless arsenal for you. Hot stepping jerkbaits, cranks, in-line blades, heavy spinnerbaits with medium to small blades and topwaters of all makes and models can be used here.

Heavy cover such as weed, reeds, stumps, rocks and downed timber will change things dramatically for lure choices. The previously mentioned selection will still work here, but you will need to pick your shots more carefully; fish edges, openings and any “gaps or pockets” when using lures with treble hooks. My preferred weapons of choice for heavy cover are single hook style spinnerbaits and topwaters. 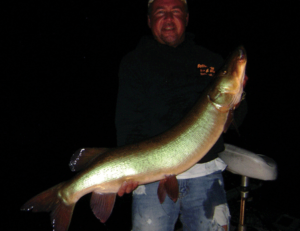 For fast topwater fishing this type of structure, we offer two lures that were performance tuned for just this situation. Our Musky Rattler dual-armed buzzbait can be burned over and through just about any cover you throw it at. We use them extensively in cabbage and just about any other heavy cover situation. A properly presented topwater over the thick stuff is simply deadly. In my opinion, there is simply NO better lure style for truly attacking and picking apart heavy cover than these single-hook lures. Most Northern Wisconsin lakes and rivers will offer abundant heavy cover areas and attacking them correctly can make or break your trip.

Single hook style spinnerbaits can be worked at many different speeds in heavy cover. For speedy presentations when fish are HOT, I recommend smaller blades and also the willow style blade. It has less lift and can be burned. Colorado’s and Indiana’s can also be presented with a fast retrieve and they also have the added affect of breaking the surface when coupled with high speed. This can trigger vicious strikes in heavy cover.

Heavier spinnerbaits with big blades can also be “slow rolled” near bottom, even to the point of making bottom contact. They can also be dropped down rock ledges and weedlines. In the fall, this is a technique you don’t want to overlook.

Light to Dark and weather transitions.

More often than not, musky fishing is a game of timing. When fish are in a neutral mood (seems like most of the time!), varying lure speeds will help. Weather and light to dark transitions are some of the very best opportunities for BIG fish and multiple fish. If you have been dealing with north/east winds, blue bird skies, wind shifts, clouds moving in and it just “feels” different, be ready. This is one of our top two favorite transitional periods. Local weather, in my opinion, has one of the biggest affects on musky fishing. Trust me, my wife Tina is constantly watching radar and the sky and looking for weather transitions. She knows what can happen.

When weather conditions are transitioning for the better, we don’t necessarily run and gun all over the lake. We choose a surprisingly small number of key spots and patiently work them over. I really think you would be surprised at how few spots we fish and also how much time we spend at good spots when musky weather shows up. Best transition is low humidity, east/northeast winds with no clouds to a muggy, low ceiling of clouds with southeast winds. Throw in a moonrise or set and you can bet your best lure you know where we will be!

This is also one of our top two transitional periods. Pick one you say? I’d really call it a tie. When the sun starts getting close to the treetops, my adrenaline will begin to rise. The lower the sun, the higher the adrenaline levels. Muskies are low-light, ambush predators. They know how to take advantage of transitions, so you need to also.

The setting sun triggers a whole chain reaction in lake and river systems. Bait fish can often be seen surfacing with larger predators boiling the water in hot pursuit. We actually call 8 pm “The Witching Hour.” Over the years, 8 pm has been the key time to be on our best spots. Often it’s short-lived, usually until about 9:30 pm, but this magical hour or two can totally change your whole trip! Look for the very best shallow cover with deeper water nearby and break out your favorite topwaters and big blade baits. The two fish pictured, 46.5; 47.5 were caught in less than 4’ of water on Musky Rattler Buzzbaits over heavy cabbage. Times of catches? 9:10 pm and 9:25 pm. 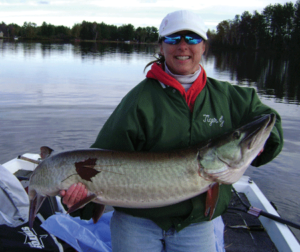 The last “transition” I want to talk about here is retrieve speed. So often we see people just reeling in a straight retrieve, with a constant speed. This will work and often does, but when things get tough, or you are getting lots of follows, but no strikes, it may be time to switch gears during your retrieve. I’m not necessarily talking about boatside moves and figure 8 techniques here, but during the whole duration of your casting.

A bait getting followed could very well get crushed if it suddenly darts forward or suddenly changes course! We have seen this over and over again. Don’t fall in to the rut of cast—retrieve—cast—retrieve at the same speed and direction all day, especially if nothing is happening! Dropping a lure suddenly when it reaches the edge of cover can also have the same affect.

Muskies sometimes (most-times??) need to be coaxed or triggered to get them to commit. All it really takes to change lure speed during your retrieve is a few hard reel cranks or sweeping your rod tip to the side and back. Another great trick is ripping your lure upward as it approaches the boat…just make sure you’re hanging on!

I will come back to some other transitional opportunities in future articles, but for now, shift into high gear, hit the gas and don’t forget to downshift if you need to.