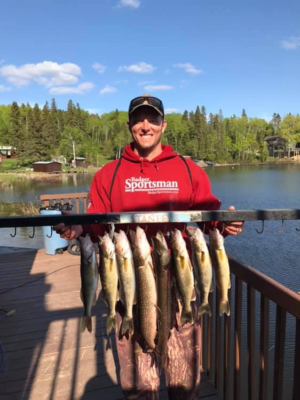 Another bucket list item was checked off my list earlier this month as I traveled to Stanley’s Resort in the west arm of Eagle Lake located in Ontario, Canada. Let me tell ya, everything you hear about Canada and the fishing, is 100% true! I had an absolute blast spending a full week on the water chasing walleye, northern, smallmouth and lake trout. To give it to you best, I will breakdown day by day my 10 day excursion and experiences along the way.

After leaving home at 5 a.m., my uncle, his good friend (Stanley’s Resort regular of 35 years!!)and I traveled a couple hours to pick up the other two guys of our group near La Crosse, WI. From there, we traveled a few more hours to International Falls, MN where we got a hotel, enjoyed a Friday night fish fry, and got our ducks in a row for crossing the border the next day. Anyone who has traveled to Canada knows that crossing the border is something to take seriously and to know and understand what is expected.

Waking up early that Saturday morning had me excited for a couple reasons. The first being that I knew in a short bit we would be crossing the border and I would finally, officially, be in Canada. The second, of course, the fact that I would be fishing Canadian waters before day’s end.

Check in for our resort was not until noon so we arrived just before that and began unpacking. Once checked in, unpacked, and somewhat settled in; we got our licenses and hit the water.

The first afternoon was a little slow and we were doing more scouting and fighting the wind than catching fish. Nonetheless it was exciting being out and seeing the gorgeous landscape Canada had to offer. 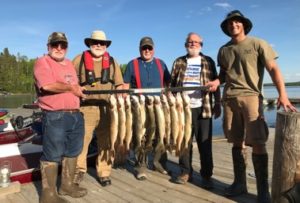 Now that we were completely settled in, we were focused on fishing and fishing only. These two days were spent chasing walleye, northern, and smallmouth (when we found them). We jumped around from lake to lake (all within the Eagle Lake chain), tried various presentations, and had some success. We practiced CPR for the most part, but decided that we would keep a couple for the freezer each day if blessed enough to do so.

For our group, we had two boats. Two guys in one and three in the other. The boat I was in had my uncle and his good friend. It was cool to learn some things from them since I had never been to Canada, and they had some different methods on how to catch fish. The pictures to the right are of my uncle with a good walleye and his buddy with a good northern from day three.

Majority of these days were spent doing the same as the two days prior. Jumping to different lakes, exploring different bays, casting, trolling, jigging, etc. Again, we had some good luck, found some good fish, and were able to put some in the live well for a fish fry later on. The one difference, on the afternoon of that Wednesday (June 5)we decided to set up and troll for lake trout. If you have ever trolled for lake trout, depending on your preferred set up, you know this is a different style of fishing. For our group, the go to was rigging up cow bells to a liter with a single treble hook and large suckers. We were trolling under 2mph in water ranging from 20-50ft. The area we were fishing was not known for having an abundance of lake trout, but was known for having the chance at a good fish. My uncle was the only one to hook up that afternoon, but it was exciting to experience this style of fishing for the first time. Below are some pictures from that day along with my uncle’s dandy lake trout.

Primary focus of the day was chasing lake trout. We had to portage to get to the lake we fished that day. Buzzard Lake was the name and the lake trout population was high and the chance of catching one was good. We started by traveling to a back part of the lake where the guys had good luck in years prior. It didn’t take long and the other boat was hooked up in the first ten minutes. A short time later I hooked up with my first ever lake trout! (pictured below).By day’s end, everyone had hooked up with a laker and we went back to the cabin with our limit of one fish per guy and five for the group. After catching our limit of lake trout, we decided to try and target some good eating size northern. As you can see in the pictures we did pretty well on day seven. 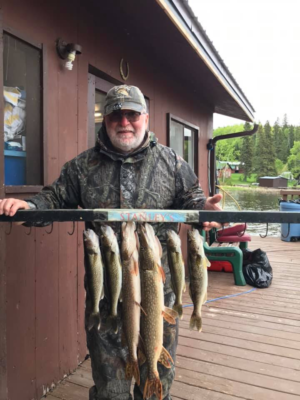 With it being the last day, we specifically targeted walleye in the morning and if time permitted wanted to go after lake trout again in the afternoon. The first half of the day we found quite a few slot walleye with a couple northern and smallmouth mixed in. Catching those mid 20’s walleye never gets old. We did end up finding time for the lakers and catch them we did. I was the first to hook up and with a nice one at that. We then, quickly, went to the portage and headed back up to Buzzard Lake and landed three lake trout in 45 minutes. Going back to the cabin that last day with a three man limit of trout was a good feeling.

For these two days, there is not much to report other than traveling, spending the night in Superior, WI and arriving back home midafternoon on Sunday June 9. What was special about these couple days though, is that I had some time while in the car to reflect and think about my week and things I had experienced and memories I had made. I could not be more grateful for the time I was able to spend with my uncle (who is also my godfather). This was the first time we had been able to share any outdoor experience together and it meant a great deal to the both of us. It was also neat to learn from a guy who has been going to the same resort, year after year, for 35 years straight! The amount of stories and experiences that build up over 35 years is unreal and it was a pleasure to hear a small fraction of those. Everyone has their routine and has their own way of how they do things, but for this particular trip I was just ecstatic to be there and be included. I guarantee that I will be back!