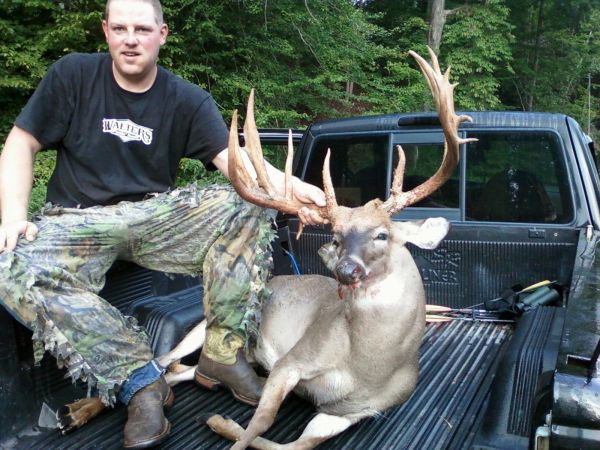 This buck shot in North Carolina by Steven Davis will likely be the largest buck ever shot with archery equipment in the state.

Steven Davis of Davidson County in the town of Welcome, North Carolina put his name in the record books when he shot what is likely to be the largest buck ever killed with archery equipment in the state of North Carolina. Davis’ buck looks to be right around 190 inches and sprouts a non-typical 5×5 frame with tons of stickers. With an inside spread of 20 inches and the longest tine at 14 inches, this buck is a monster all the way around.

Davis shot the buck on the morning of September 18th after watching it for four days in a soybean field near his home on private land. He put up a new stand around 50 yards off of the edge of the field on the opening day of the North Carolina archery season, September 13th and hunted it the next morning. Davis was able to watch the buck bed and stand up in the soybean field and walk downwind several days in a row until he finally get he wind right.

“I hunted Monday and saw him twice,” said Davis. “He came into the beans and bedded down in the middle of it with the 6-pointer” He’d get up and leave and come back, I guess he was going to get water and coming back to his bed. I saw him two times on Monday, Tuesday and Wednesday, but I had a bad wind, a north wind, that was blowing wrong. He’d get up every day and walk away.”

Davis watched the buck with the smaller six pointer strip away it’s velvet for days. The littler buck would eat the larger buck’s velvet right off of it’s horns and Davis said that he would watch the buck for 30 minutes at a time through binoculars.

“I know so much more about deer from watching those two deer,”Davis said. “On Sunday, he was in full velvet. On Monday and Tuesday, he had velvet hanging from his horns and it looked like he had even more points than he did. By Wednesday, his antlers were clean, and when I killed him Thursday, they were bone white, no blood or bark anywhere, and he had a 6-inch strip of velvet left on each antler.”

On Thursday September 18 Davis got to his stand well before daylight. He was sitting down and at 6:45 am the buck stood up in the beans with the little buck 75 yards away. This time the wind was right and the deer moved his way. The deer walked in the woods to his right and then after an hour, came out right by him. The little buck stopped and the big one kept coming until Davis put a bolt from a Horton crossbow tipped with a Swhacker broadhead into it.

The buck ran off and Davis found it on the other side of the hill in the soybean field in a creek. After word of the buck spread, many other hunters came forward with trail camera photos of the deer from past years.

Check out more big buck stories including this monster shot in Minnesota in 2014.