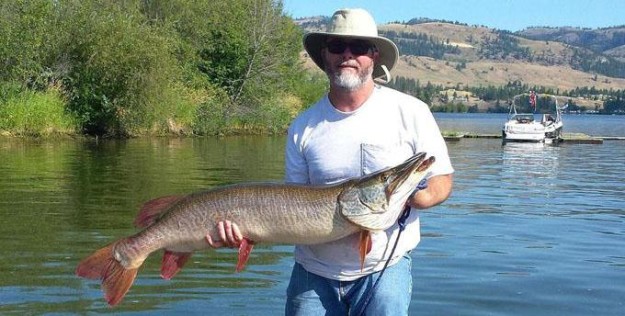 David Hickman caught this 37 pound 14 ounce tiger muskie on Curley Lake in the state of Washington. If approved, it will be the next state record

It’s been a big year for big fish in the state of Washington and we may be able to add another record fish to the books. A potential state record tiger muskie was caught on Curlew Lake, Washington, one of the state’s best Tiger Muskie fisheries. Earlier this year a new Washington state record walleye was caught as well.

Fisherman David Hickman caught this 37 pound, 14 ounce Tiger Muskie on July 25th. The fish was 50.37 inches long and was weighed on a certified scale according to the Spokesman Review.  If all is approved by the Washington Department of Fish and Wildlife, the muskie will top the current record of 31.25 pounds that was set back in 2001.

Muskie fishing is a sport of it’s own and features some of the most hardcore anglers in the world. Tiger muskies are a cross-breed of female muskies and male northern pike. They are a sterile fish and they are stocked in Curlew Lake in Washington without fear that they’ll take over, since they can’t reproduce. The giant muskie that Hickman caught was 12 years old and was planted in the lake back in 2002 along with 335 others.

Washington state fishery biologists were not surprised about the catch and Bill Baker said that he thinks Curlew is one of the fastest growing and most robust tiger muskie fishing spots in the state.

According to Muskies Inc., an organization promoting muskie conservation, Washington produced eight of the top 13 all-tackle tiger muskies officially recorded in the U.S. in 2013, and eight of the top 10 in its fly-fishing category.

We’ve seen some great muskie photos coming in lately and the hot season is creeping up. What’s the biggest muskie that you’ve landed?