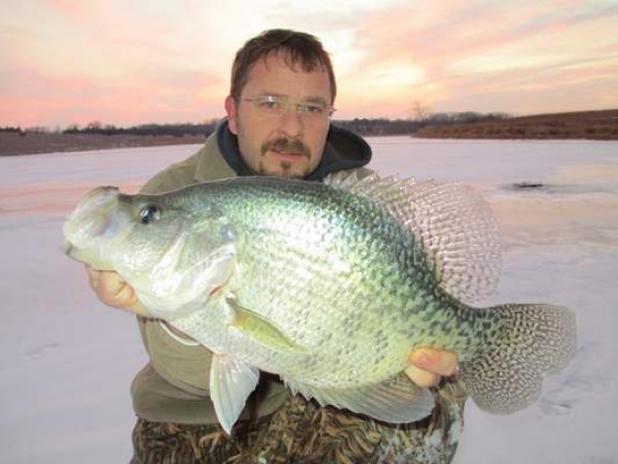 On December 15, 2013 Andy Moore may have caught a fish that would have propelled him into the record books, but he decided to make a short video and let it go so that someone else could enjoy it. Just outside Omaha, Nebraska, Moore was ice fishing on a balmy 15 degree day when he hauled this monster black crappie, shown in the photo, through the hole in the pond he was at. The fish measured in at a whopping 19 inches and has a mouth like a bass.

Moore knew that the closest game and fish department employee that could officially certify and weigh the fish for the record books was an hour away and he didn’t want to risk the fish dying, so he let it go.

“Any fish that’s rare or a trophy fish or a Master Angler size always goes back (in the water) in my book,” he said. “It’s just good for the gene pool and good for somebody else if they catch it. I’m a firm believer in that. Too bad people don’t do it, especially in our Metro lakes.”

Monster Crappie Could Have Been a Record

While this was a difficult decision for anyone to make, the video that Moore made was shown to a fisheries outreach program manager for Nebraska Game and Parks and they calculated the fish to weigh five pounds based on the measurements. The current Nebraska state record is 4.8 pounds and the world record is 5 pounds.

Moore said that everyone fishes for a different reason, but his is the fun of the catch and when that fish bites.

In any case, this is a massive crappie that anyone would be proud to hang a real mount or replica on their wall.

Watch the Video of the fish here