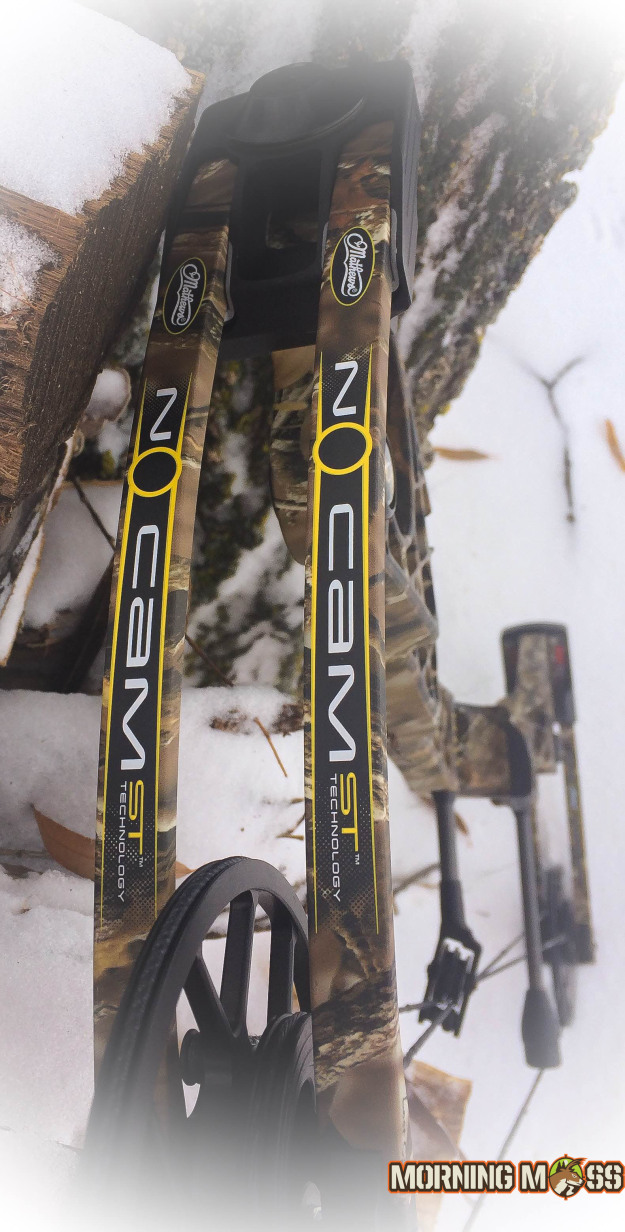 The revolutionary Mathews NO CAM HTR is a bow with no cams and is one of the smoothest drawing bows ever shot.

Mathews released their newest addition to their lineup earlier this month and I was incredibly excited to try it out. The Mathews NO CAM HTR is part of the 2015 lineup of bows from Mathews Inc. and features their latest NO CAM ST Technology. This bow is one of the smoothest drawing, quietest bows that I’ve ever shot and it was very stable at the draw. See more the Mathews NO CAM HTR Review below. 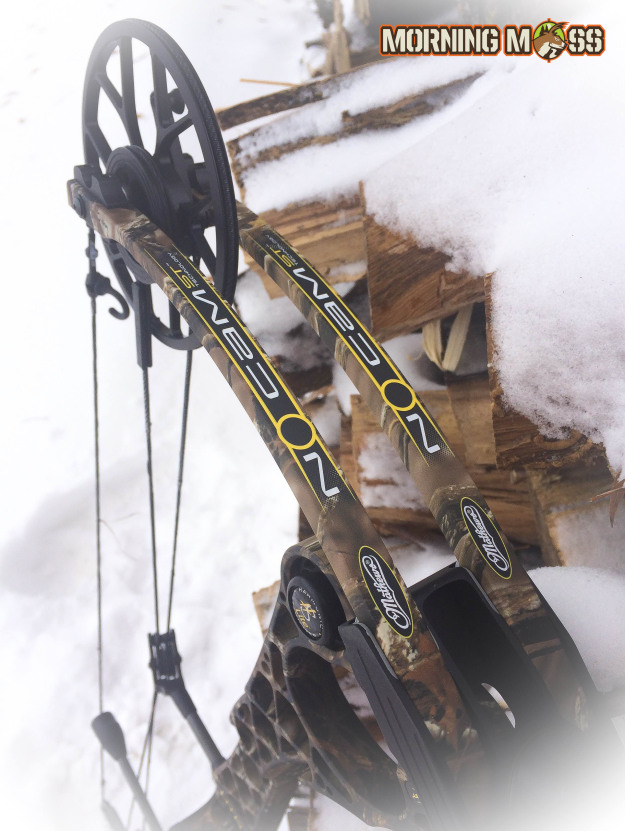 The 2015 lineup of Mathews’ bows includes the NO CAM HTR and several target models that use the no cam string track.

The 2015 Lineup of Mathews Bows has a whole series of bows that focus primarily on the NO CAM string track. They also have the TRG NO CAM models that are built for target shooters. Since I’m a hunter and have shot the normal HTR, I’m going to focus on that bow in this review. 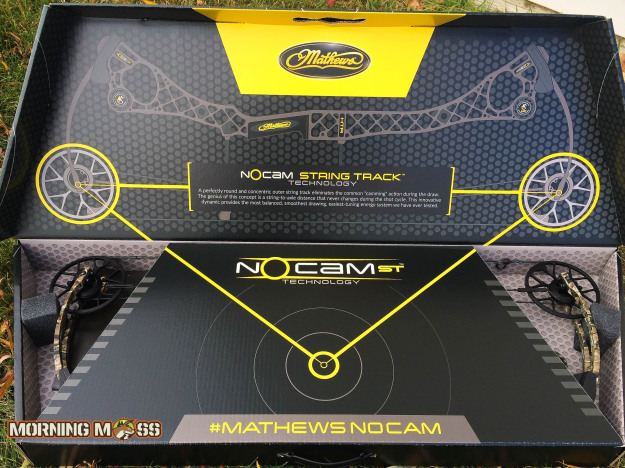 Mathews has a way with their packaging and making something look like a million bucks. They hit it out of the park with the NO CAM HTR

When I pulled the Mathews NO CAM HTR out of the box I was incredibly impressed with the fit, finish and fell of the bow. Mathews is first class in their packaging and you can tell just by looking at the bow that it’s made of some of the best materials available. The first look at the NO CAM HTR makes you do a double take because it’s just different, but that’s due to that fact that, you guessed it, the bow has no cams. The Geo Grid lock  riser is on this bow and the grip is the narrow Focus grip with walnut Mathews logo on there. Overall, the first appearance is great and I was really impressed with the look and feel of the bow right out of the box. 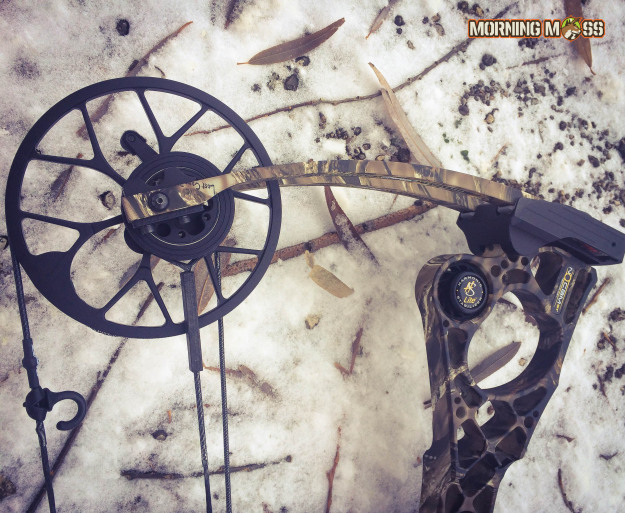 The Mathews NO CAM HTR has no cams, which allows a shooter to pull the bow back without feeling any flat spot like you would on a traditional cam.

Let’s start with the biggest change in this bow… NO CAMS! Mathews’ all-new NO CAM ST technology uses two circular, concentric, string tracks that make the bow string travel at the same distance from center of rotation throughout the entire draw cycle. This means, that your entire draw will be smoother and you will not feel the cams turn to that flat spot when you pull back like you would with other bows. Eliminating that “camming” action that you get from transitioning from round to flat areas on a normal cam makes getting the string from your brace height to full draw much easier than ever before.

Mathews says that the new NO CAM lineup of bows will give an arrow much better flight than ever before.

According to Mathews, the NO CAM string technology produces a much flatter, truer arrow flight than on other bows. This is because when the arrow is released more energy is transferred to it. More energy transferred to the arrow means less energy left for noise and vibration, which means a quieter hunting bow. 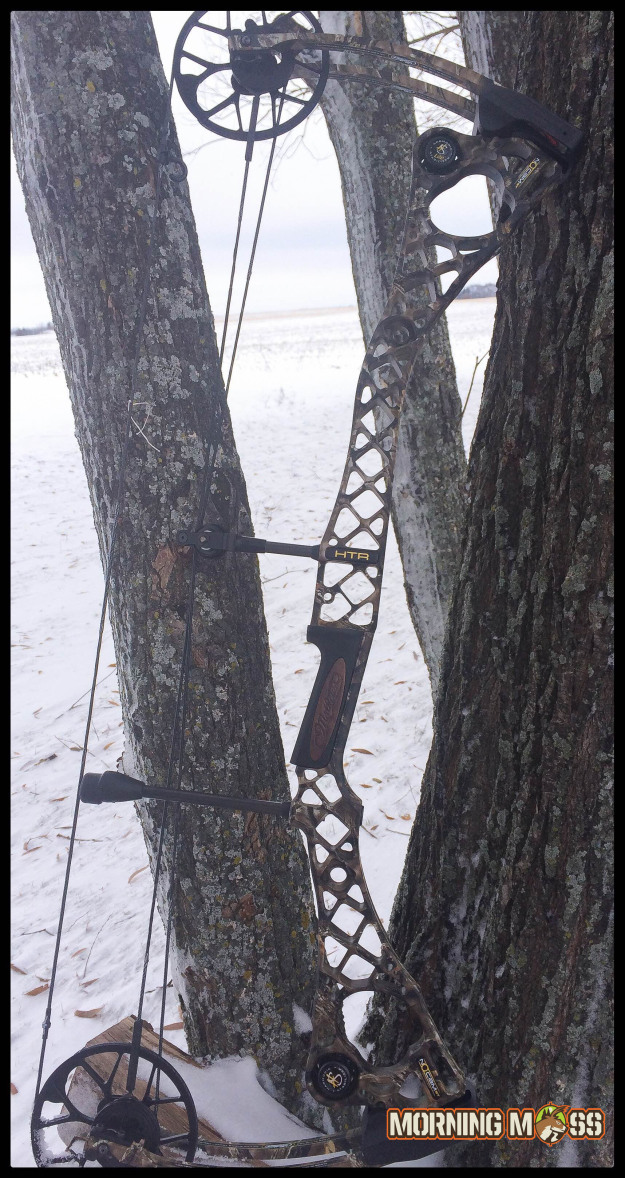 The bow is longer than some models, but is lightweight, agile and would make a great hunting bow.

The Mathews NO CAM HTR has a total weight of 4.3 pounds bare bow. The brace height is 6 5/8 inches and it can accommodate draw lengths from 24 to 30 inches in half inch increments. Draw weights are pretty standard and come in 50, 60 or 70 pound draws and you can adjust the let off to 65, 75 or 85%. The color options include  a few new ones this year but you can order your Mathews NO CAM HTR in Lost Camo, Lost Camo OT, Black Anthem, Black Tactical and Stone Tactical. The price of the Mathews NO CAM HTR has a base of $1,099, which is very comparable to other Mathews products and other archery companies on the market for a top of the line bow.

The length of the bow is 32 inches from axle to axle and the riser length is 28.93 inches. Currently, I’m shooting the Creed XS, which has a 30 inch length and I did notice the longer bow. That being said, I am only 5’9 so taller people will likely enjoy the longer bow of the HTR. 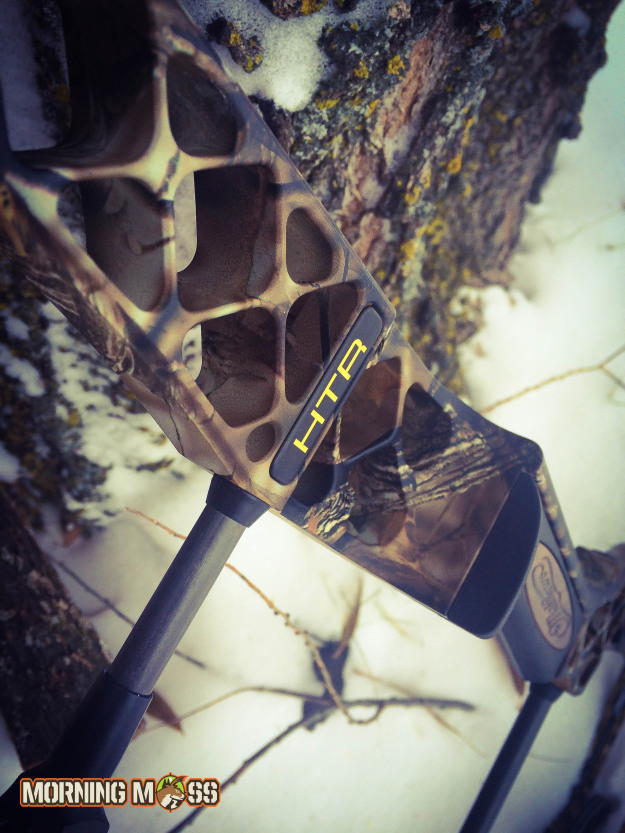 The NO CAM HTR is not the fastest bow on the market, but is adequate and speed is an over rated factor to most hunters who prefer agility and accuracy.

The HTR is not going to be the fastest bow on the market, but that’s ok with me. As I’ve said before in other bow reviews, speed isn’t a big deal to someone like me. I’d rather have a bow that performs well for hunting and has good accuracy and is quiet. Most of all, I want something that’s easy to pull back when I’m cold and won’t fail. That being said, everyone likes to know how fast the newest bows are, so here are the speeds for the NO CAM HTR. With 65% let-off, the IBO rating is 330 FPS, with 75% let-off, the rating is 325 FPS and with 85% let-off the speed is 321 FPS. I have it at 85% let-off and I’m sure most other hunters will as well. I don’t think that that extra 9 FPS is going to make that big of a difference and I’d much rather be able to hold the draw longer when a big buck walks in.

How does the NO CAM HTR Shoot? 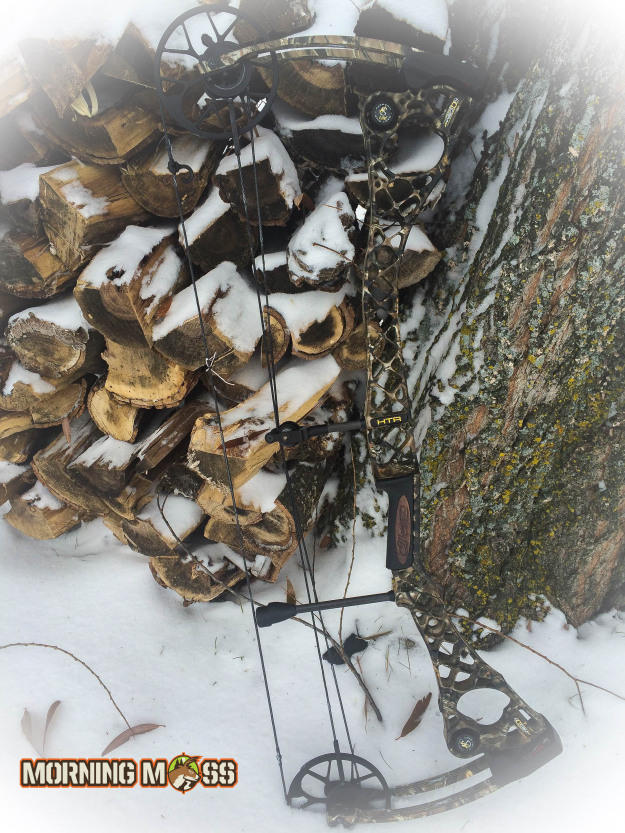 The NO CAM HTR is a pleasure to shoot. I’ve shot many Mathews bows and this one is different. Very smooth, very quick and very accurate.

Here’s the big question and the one that every archer should ask themselves before purchasing a new bow. How does it shoot? Everyone is different and everybody likes different things, so you should definitely shoot a bow before buying it. However, here are my thoughts on the new Mathews NO CAM HTR performance.

I was really impressed with how smooth the draw was. I know I keep bringing it up, but it was really easy to draw and you never felt a jump on the arrow when pulling back. Once I hit the back wall, I knew i was set and holding it there was very easy as well. Mathews’ Rock Mods stop the string quickly when you get it back, so you know where you are in the draw cycle without any camming action.

Once I was drawn back with the HTR, I found it was easy to stay stable. I really liked the Focus Grip that Mathews put on this bow. It’s really narrow, but I like that and feel like I can loosen up my fingers more with it. When I shot, it was very quiet and the bow didn’t vibrate at all. This is definitely the quietest bow that I’ve ever shot. I think after spending some more time with it, I’ll have better inside to the arrow flight, but from what I’ve seen so far, it is really accurate.

I didn’t have any problems adjusting this bow and setting it up. In less than an hour, the site was right on and the draw weight was down to what I wanted. The bow was really easy to get sighted in, much like the Creed XS that I shoot, and that ‘s a huge positive for me. 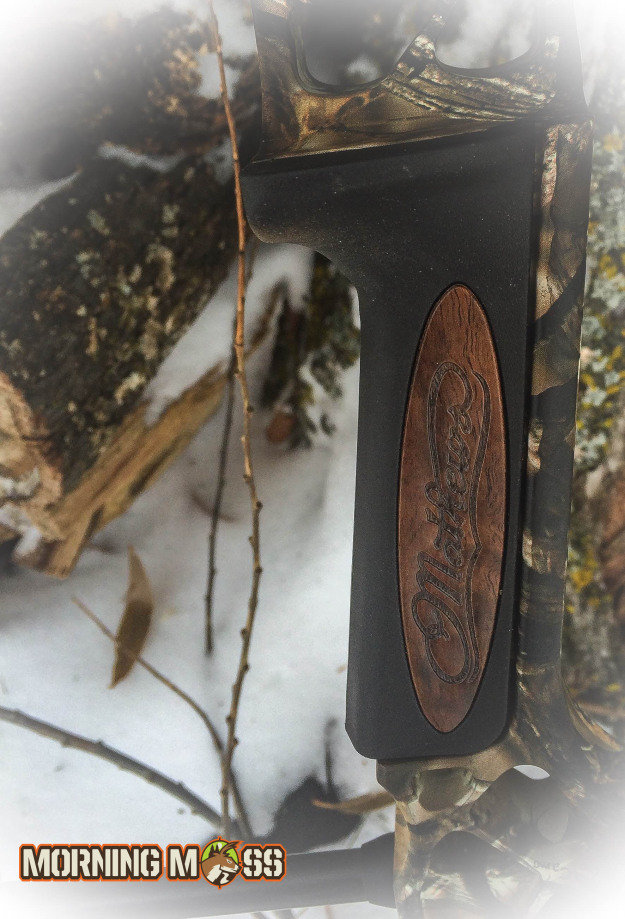 One of my favorite features of this bow is the Focus Grip from Mathews. This narrow grip is awesome for shooting and the walnut insert with their logo was a very cool touch.

Overall, I would say that Mathews nailed it on the new NO CAM HTR. Obviously, the NO CAM ST technology is what’s going to get the most attention with this bow, and rightfully so, but there are many great features to it. The gradual and consistent draw was very nice and I really liked that my arm didn’t “bounce” or anything while drawing back. That really helped me keep the bow on target and stay focused, however dumb that may sound. This bow also features split limbs, which is something new from Mathews in the last few years and it seems to be working out for them.

This bow is capable of killing any animal that you hunt and is also a great choice as a target bow. I judge bows on how they can perform while hunting and Mathews is the King of building simple designs that won’t break down. The Mathews NO CAM HTR is a perfect example of that and will easily be able to shoot well from a tree stand and in any hunting environment.

Find more information on the Mathews NO CAM HTR on their website and check out the video below on how they came up with NO CAM ST Technology.

Read more hunting gear reviews like this one on MorningMoss including the Mathews Creed XS review.