Wisconsin In Black And White

The Thrill of Late-Season Divers 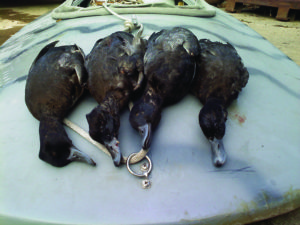 A cool northwest wind blows dead leaves from the trees, sending them skittering down the street. Change is in the air, and one glance through binoculars confirms it. Slicks of black-and-white dots cover the lake. It’s diver time.

Divers, of course, means diving ducks; specifically redheads, canvasbacks, buffleheads, goldeneyes, ringnecks (or ringbills) and lesser and greater scaup (bluebills and broadbills). To a lesser extent, the category also covers mergansers, ruddy ducks and several types of sea ducks, including scoters and long-tailed ducks. Every autumn, divers sweep across Wisconsin during their annual migration east and south. And during the few weeks they’re here — typically early to mid-October until freeze-up, depending on the species — these sporty birds provide some of the most anticipated wing-shooting of the season.

Most waterfowlers have shot divers incidentally while hunting larger lakes or rivers, but it takes a special approach and equipment to target them specifically. Here’s how to succeed at the black-and-white game.

Hunting from Shore or Cover

It might seem strange to break diver strategies into two categories, but hunting from shore or weed beds differs from open-water hunting. More folks use the former tactic, so we’ll start there.

Diving ducks naturally feed and loaf in open water. They dive underwater to eat weeds, crustaceans or even fish rather than tipping up like dabblers to munch on shallow vegetation. Moreover, after being shot at a few times, diving ducks find sanctuary in open water, and they like to stay there unless high winds get them moving. To kill divers from shore or cover, you must lure them from open-water flight lanes and entice them to land.

Start by using lots of decoys; as many as you can safely carry or haul. Migrating diving ducks flock into large rafts during fall, and they recognize safety in numbers. Some hunters set up to 200 decoy; four or five dozen should be the minimum.

Most divers react well to any kind of diving duck decoys, including can, bluebill and bufflehead fakes. Goldeneyes, however, typically decoy best to one or two strings of their own kind. Whatever type of decoys you use, make sure you have plenty of drakes, as the white on these colorful birds attracts divers from a distance. However, don’t ignore hens, as those dull or dark decoys provide stark perspective and realism in a spread. 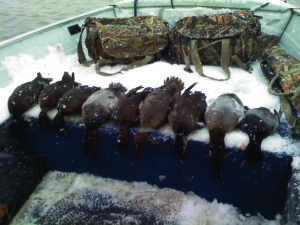 The best diver spreads feature a large body or mass of decoys upwind from your boat or blind, a hole or landing area in front of your hide and then a long string or tail of decoys extending downwind. The theory goes like this: Diving ducks love to fly over their own kind, so when they see decoys and commit, they typically swing to the downwind tail, follow it to the hole or landing area and then cup their wings before hitting the main spread. You’ve probably already guessed that J-hook-type spreads work well. If you’re using multiple-decoy lines, a spread consisting of four upwind lines (the body) and one or two downwind lines (tail) usually pays dividends. Always set your tail on the inside of the spread, closest to the blind. That way, even divers that flare or streak across the blocks will still be in range.

Here’s another trick — one most people ignore. Remember how divers want to be in open water? Set your decoys so there’s at least some open water visible upwind of them. This makes ducks believe they’re landing in a safe, open area. If you’re hunting from a point, weed bed or rock pile, set your main body of decoys so water is easily visible behind it. Then extend the tail so it points toward the main body and water beyond. When hunting from flat shorelines, this task can be difficult. It’s OK if you have an angle to the wind, as with a straight north or south wind when you’re facing east. A straight west wind from that east-facing perch will often leave you frustrated, however, as your decoys will be backed by shoreline, and many ducks will land short.

Also, go heavy with your decoy anchors. When using multiple-decoy lines, use old window sashes or similarly heavy gear. When the wind kicks up and waves begin to pound, even heavy-duty anchors can lose their grip on the bottom and set decoys slowly adrift.

This game differs considerably from shore hunting. First, you obviously have no natural cover when you’re a half-mile from shore. Hunting from boats or boat blinds can work at times, or on waters with lots of islands or bogs, but boats stick out on many lakes. And although most divers aren’t as savvy as November mallards, they flare from unnatural scenes — especially if they’ve been shot at once or twice.

Layout boats offer a huge advantage. These specialized low-profile crafts almost eliminate your outline and let you lie amongst your decoys. With the sun at your back and a light chop on the water, they almost disappear. I could write a long how-to book on the nuances of layout hunting, but here’s a brief overview.

Logistics and equipment are the main challenges in layout hunting. First, you need a large boat, called a “tender craft,” to transport hunters, decoys and the layout boat. Any good-sized fishing boat will do, but I’d recommend using one at least a 16-foot deep-V. Larger crafts are preferable.

You can use independently rigged decoys, but pre-rigged multiple-decoy lines save an immense amount of time and work. Several retailers offer great commercial mother lines and leaders, but the best come from Doctari Longlines in South Milwaukee. Doctari uses large lobster clips on its leaders, making it easy to attach and detach decoys.

Set up your lines so you can transport as many decoys as your boat will safely haul. You won’t need quite as many blocks as when shore hunting, but you’ll want at least four dozen. Store your rigged long lines along the rails and deck of your boat, or coil them into large lawn bags. The key is making sure the decoys and mother lines don’t tangle.

Most layout hunters first anchor their layout boat and then set decoy lines around it. I’ve seen some folks who do the opposite. It really doesn’t matter, provided you leave plenty of space and maneuvering room between the boat and decoy strings. Trust me, you do not want to catch a mother line or layout anchor rope in your prop. 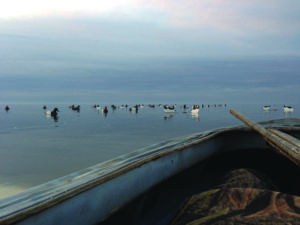 Don’t worry as much about spread shapes in open water. Set your decoys so they’re drifting downwind. Placing blocks at an angle or, worse, perpendicular to the layout boat will cause lines to bow, drift and possibly tangle. Plus, it makes setup and pickup very difficult. Get your boat upwind of the layout, and then drift or motor with the wind while the other passengers throw the anchor and then toss decoys overboard one by one, forming a straight line. When you’ve thrown the last decoy in the string, run the line to its appropriate spot. Keep the string taut, and then drop the downwind anchor.

If it’s calm or birds seem spooky, consider placing a few singles in the open pocket in front of the layout boat, behind the spread or outside the lines. Again, this will break up the blocky appearance of the lines.

When your spread is set, get the first hunter in the layout boat. Motor very slowly toward one side of the boat — preferably from downwind so you can better control your drift — and then stop or hold the boat in place so the hunter can step inside the layout. Then hand him his unloaded gun and shells.

When the hunter is set, the tender-craft operator becomes the hunt supervisor, watching the shooter from a distance. Typically, a few hundred yards is sufficient. When the hunter shoots a bird, the tender-craft operator pulls anchor and motors toward the downwind head of the spread. It’s easy to see dead ducks bobbing in the waves, but cripples can be tough. That’s why it’s wise to use two-way radios so the hunter can communicate to the boat operator where his duck is and whether it’s dead or diving. Use a large fishing net to retrieve dead birds. You might be tempted to take your dog layout hunting, but don’t. They only get in the way.

Three notes. Here’s the bad thing about divers: They dive. That is, if your shot doesn’t kill them in the air, they often hit the water and start diving to escape. And unless they’re mortally wounded or have broken legs, they’re very good at eluding hunters. Don’t give them a chance. If you shoot a diving duck but it pops its head up after hitting the water, shoot it again — immediately. If it starts diving, pursue it until you can safely and legally finish it off. Exhaust every available legal effort to finish the job. Losing crippled birds can spoil a hunt, so be diligent about dispatching wounded birds.

Also, many divers get a bad rap as table fare, and that’s unfortunate. Canvasbacks might be the tastiest North American duck, and redheads and ringnecks are also consistently good. Bluebills — even those that dine on mussels or other crustaceans — are tasty if you trim away all fat from the meat, wash out bloodshot areas and soak them in saltwater for a day or so, changing the water often. Buffleheads taste a bit more like liver but are also good eaten fresh. Goldeneyes and sea ducks can be strong tasting, so it’s wise to marinate their meat or chop up the breasts for stew or stir-fry. They’re also good candidates for jerky or sausage.

Finally, be safe above all else. Plying choppy 35-degree water is dangerous business. Don’t overload your craft, and always wear your life jacket. If the wind or weather looks troublesome, don’t go out. No limit of ducks is worth even the slightest chance of risking your life.