Just off the Frozen Tundra 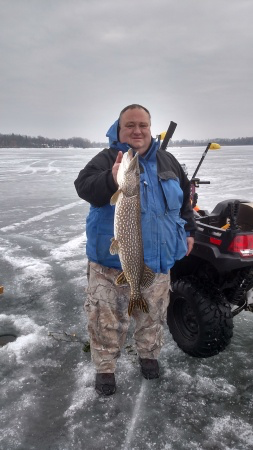 It’s time to break out the ice fishing gear and prepare for what should be a great ice fishing season!

While numerous inland lakes are already covered with a few inches of ice, my thoughts turn to ice fishing on the Bay of Green Bay. Part of my pre-season preparation includes deciding on what species to target and when. In recent times, whitefish have been all the rage on the bay. Especially in the northern parts of the bay. But other species like pike, walleye, perch and even smelt are available if you know where to look and when.

The early ice season offers some of the best fishing of the year. However, you need to use extreme caution on a body of water the size of the Bay of Green Bay. It is not uncommon for the bay to freeze over with as much as six inches or more of ice only to have open water the next day due to strong winds.

During the early ice season, I concentrate on the smaller protected bays as well as the Sturgeon Bay shipping channel. Areas like Little Sturgeon Bay and Riley’s Bay freeze first and are generally protected from ice damaging winds. However, check with local bait shops before venturing out.

The Sturgeon Bay shipping channel offers some excellent early ice pike fishing. Tip ups baited with large suckers or shiners are deadly. I like to locate the weed edges and set my baits just above the weed tops.

Early in the morning and late in the evening I also jig for walleyes. I like to use a ¼-ounce jig tipped with an emerald shiner or fathead. I will target the drop offs and will keep my jig within a foot of the bottom.

Little Sturgeon Bay – just west of Potawatomi State Park – is a popular area for ice fishing. Perch, walleye, pike and whitefish are all available. Since the water here is so clear and relatively shallow, I believe it’s important to try and stay away from other fishermen.

I will set tip ups for pike while I jig for perch and whitefish. For perch I like small tungsten jigs tipped with a larva of some type. I also enjoy using tip downs baited with fatheads. Don’t be surprised if you catch walleye, whitefish and pike in addition to perch on your tip downs.

Other areas along the bay

As winter lingers on and the bay freezes over, more opportunities exist. In a typical winter, the Bay of Green Bay will freeze over completely from the west and east sides and as far north as Washington Island. This is the best-case scenario.

However, during the past couple of winters, the U.S. Coast Guard has used its ice breaker to keep a shipping lane open so ships can get into the lower bay all winter long. The Coast Guard will also break the ice in the Sturgeon Bay shipping channel until all the ships that are scheduled for winter layover have arrived. The U.S.C.G. is very good at notifying the public about their ice breaking operations. Again, check with local bait shops for current ice conditions before heading out.

The “lower bay” of Green Bay is another popular ice fishing area. You will find large groups of fishermen off shore from Dyckesville. There are several areas to access the ice including Bay Shore County Park in far northern Brown County and Red River County Park just north of Dyckesville. Perhaps the most popular and easiest access points is at Lipsky’s Pizza/Motel in Dyckesville. For a nominal fee you can drive right onto the ice and be close to several good fishing areas.

A key piece of equipment for any fisherman is a good lake map or chip. There are several key areas in the lower bay. Look for reefs and points. Being mobile is important.

The lower bay is one of my favorite areas for perch. Jigging, dead sticking and tip downs all work well. The lower bay also offers good opportunities for whitefish and walleye.

The west shore of the bay off of Suamico offers some good pike fishing. Tip ups with large shiners or dead bait like smelt or herring are effective. 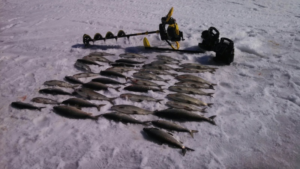 Whitefish have become a very popular target species on the bay in recent years. Whitefish have been commercially fished for many years in the Great Lakes. Commercial nets are set in hundreds of feet of water in order to harvest these fish.

With the change in the ecosystem due to invasive species, whitefish have become more accessible to sport fisherman by coming into relatively shallow waters in order to find food. Perhaps the most popular area to fish for whitefish is the Larson’s Reef area out of Sturgeon Bay. You can access the ice off Sand Bay Point Road. An ATV, UTV or snowmobile is a must in order to get to the steep drop offs of the reef.

The drop off is several miles long and there will be hundreds of shacks set up in the area. Target whitefish along the drop offs in anywhere from 40 to 80 feet of water.

I like to use a Swedish Pimple in either gold or silver with a slider hook about 12 to 18 inches above it tipped with a waxworm. I will also load the pimple with waxies as well.

There are several other plastic alternatives to wax worms that also work well. Use the pimple to pound the bottom in order to create a “dust cloud” of sand to attract the whitefish. Odds are that the whitefish will hit the wax worm on the slider hook. Another popular rig is to tie a bell sinker on the end of your line with up to three slider hooks above it.

The most important tip for catching whitefish is to stay far away from other fishermen! Even in deep water, whitefish are extremely spooked. I have been in hard shacks with an underwater camera on deeper than 80 feet of water and have seen whitefish scatter because someone let the shack door slam.

Being mobile is also important. “Fish have tails, not mortgages,” is fully applicable adage here. Because of the spooky nature of whitefish, I will typically pick a spot and drill a few dozen holes in the area. That way I am making all my commotion at once and the fish will have time to settle down and come back to the area.

Green Bay is also known for its walleye. In the Door County area, trophy walleye through the ice are especially well known. While not a numbers game, the odds of catching a trophy walleye are good.

In the Door County area, the best time to fish walleye are early and late in the day. Typically, I will set up before sunrise in 15 to 20 feet of water off a point or other structure. I will work my way out to around 30 feet of water as it gets lighter out.

Use a jig and minnow or a Rapala Jigging Rap while paying close attention to your flasher. Sticking to a regular jigging cadence for at least 20 to 30 minutes is key. If you do not have any luck, change your cadence. After a couple hours in the morning, go fish for whitefish and return to walleye in the late afternoon.

The Bay of Green Bay is a unique and prolific fishery year around. But it offers many excellent opportunities for ice fishermen. Get out and try your luck.

Ice fishing allows us to pass the time during the winter months by being outside with friends and family. Please take a kid along anytime you can to ensure the strength of our sport will continue for many years. Stay safe and get hooked up!

Andy Mack is a USGC Charter Captain and licensed Wisconsin fishing guide with more than 35 years of experience. Mack specializes in walleye, salmon, trout and panfish throughout Wisconsin, including the Great Lakes and Winnebago system. Contact him at 262.510.1452, by email at amack15@att.netor online at AndyMackSportfishing.com.