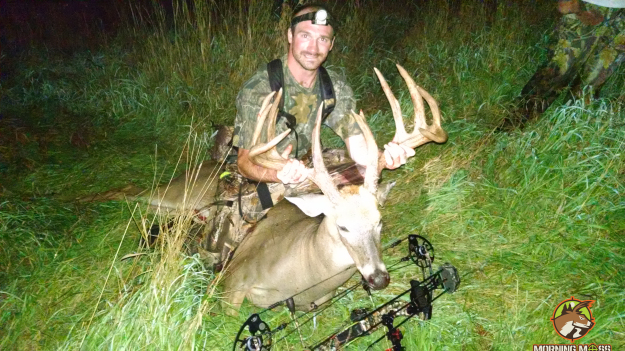 Beau Pilgrim shot this big buck in Central Minnesota on September 14 2014 with his bow.

Early season bow hunting can be some of the best hunting of the year, especially if you’ve got big bucks patterned. While the rut is incredibly exciting, early season offers some of the best chances at mature deer while they’re still in a predictable pattern.We’ve seen a lot of giants fall this year in the early season, including this big buck sent in by Beau Pilgrim. Bow shot this big buck in Central Minnesota on September 14. Read on for more of the story.

Beau gets the official score on this deer back on November 13th. The buck is a big 10 pointer that he shot at 40 yards. He came in to his setup at 40 yards, but there was no shot available since there were three little bucks beneath him. Beau had to watch this giant walk away at 120 yards thinking he was gone for good, but then the buck turned around and came back.

Beau said his heart was pumping so hard with adrenaline he wasn’t sure how the shot was, but it looks like it was perfect! Beau was able to shoot this buck with his Mathews Chill and has been passing up many deer for the chance at a buck like this.

Congratulations Beau on an awesome buck. We’re sure that you’ll enjoy this one for a long time and hopefully you’ll be able to put a few more like it down. Needless to say he shot this one with his bow, which always makes it a true trophy!

Check out more user photos of big bucks and send yours in to be featured by emailing PJ@MorningMoss.com