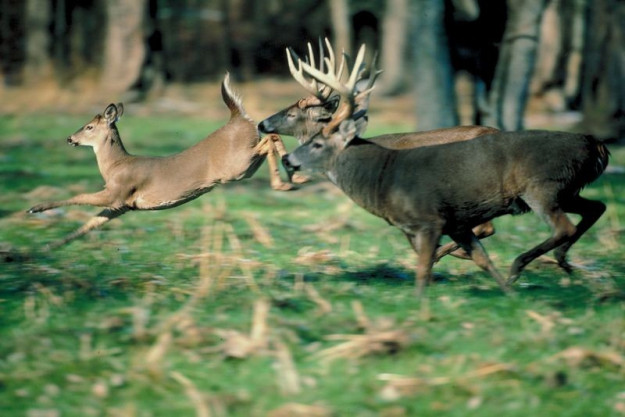 The best days to hunt the rut in 2015 are going to be earlier this year due to the early rutting moon.

While any day deer hunting is better than a day not hunting, we all will admit that some days are better than others. The rut can be the best time of year to be in the woods (unless the buck you’re after chases a doe onto the neighbors’) and timing it right can make or break your season. We know that your time is limited and we want to help you plan your work schedule and time on stand to best coincide with the best days to hunt the rut 2015. Keep in mind that these dates vary from state to state and region to region, so be sure to continue your scouting and observations while hunting. 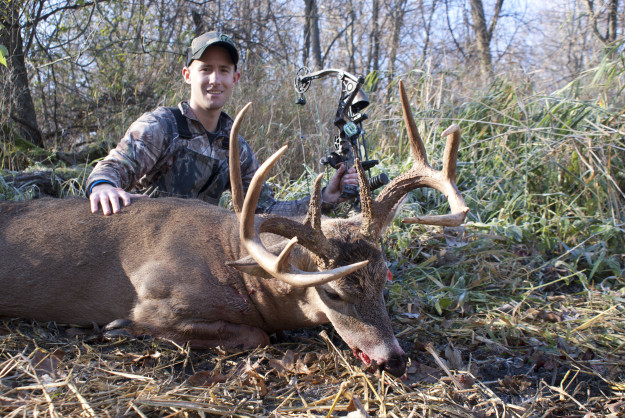 This Wisconsin buck was shot on the morning of October 27, 2012.

We’ve talked plenty in the past about how the moon affects the rut and about our rut predictions based on the calendar but these are the two most popular theories regarding rut timing. Most biologists and experts will say that the most accurate way to determine the rut is by photoperiod (the calendar year when the days get shorter). The photoperiod theory says that deer have their fawns at the same time every year and there is a short window for breeding due to winter weather. The fact that they have fawns on nearly the same dates each year, proves that they breed at the same time. However, there is a ton of evidence and expert hunters who swear by the moon.

Moon theories are based around the timing of the moon phase, or the “Rutting Moon”. This year the rutting moon falls on Tuesday, October 27, 2015. The rutting moon is the second full moon after the autumnal equinox and many people who believe in the moon theory say that this triggers the seeking phase. Since October 27th is relatively early compared to many years, the rut would, in theory, kick in earlier.

Whether or not you believe in the moon theory or the photoperiod theory, one thing to take away is that October 27th is going to be a good time to be in the woods. Remember that weather trumps all theories, so watch for cold fronts near this date and that can indicate a great hunt as well.

Look For: Rubs, scrapes and hot food sources that bucks may be scent checking

The pre-rut is a really fun time to be on stand. Young bucks tend to get ramped up and you may even see some older deer on their feet before dark in marshes, fields and near their beds. Does do not typically get hot until late October and into November, but you may see some bucks chasing them if they think they are coming into estrus.

Bucks will begin to establish their dominance and territories here, so look for scrapes and put trail cameras near them to see what bucks are using them. Rattling and grunting are also good tactics to bring an aggressive buck to your stand.

Look For: Fresh rubs and scrapes. The fresher, the better, hunt it right away.

Personally, I see the chasing phase a little earlier than this, but most people find the first week of November to be the best for the chasing and seeking phase. Bucks are all up and after does at this point and you’ll notice a lot of fresh sign in the woods. Rub lines and scrapes are good indicators that a buck is working that territory, so hunt these spots right away.

Hunt funnels and doe bedding areas during this time. If you can find the does, you’ll find the bucks. Rub lines and travel corridors are great spots to find a buck that’s looking for a hot doe.

Do not be afraid to hunt all day during peak breeding. This can be the slowest time in the woods, but it can also pick up incredibly fast. Big, mature bucks will not leave a hot does side, so be patient and wait for the does to come. If you know a hot food source, this can be an incredible spot to hunt during peak breeding season.

Seeing deer during peak breeding can take some dedication but it can also bring you some of the biggest bucks in the woods if you sit tight and be patient.

While these dates are a good indicator, remember weather and pressure trumps all. If you get a cold front from mid-October until December, hunt it hard. Cold fronts are some of the best weather that you can get for deer hunting and can lead to some monster bucks on the ground.

If you want to read more rut hunting tips, check out MorningMoss on Facebook and be sure to send us your trophy hunting photos this fall.