The 2015 WI Sturgeon Spearing Season was the 6th Highest Harvest 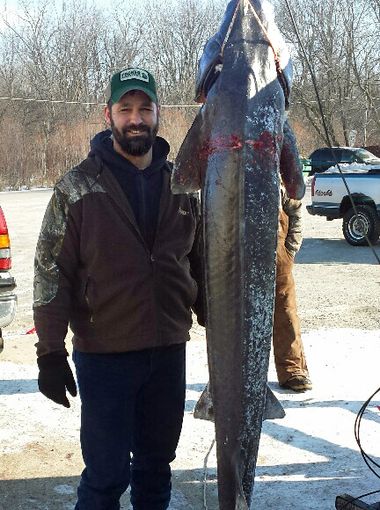 Chad Gerney speared the largest sturgeon of the 2015 season that was 81.3 inches long and weighed 137.5 pounds. Photo from Wisconsin Department of Natural Resources

The Wisconsin sturgeon spearing season was one of the most brutal this year in terms of weather conditions, but was one of the most successful in terms of speared fish. The season opened on February 14 with negative temperatures and 45 mile an hour winds and lasted until this past Saturday on the state’s largest lake, Winnebago. With a total harvest of 2,158 fish, this was the sixth highest harvest on record.

2015 WI Sturgeon Spearing is a Success

Sturgeon spearing in the state is a sport that is steeped in tradition. On Lake Winnebago, which is home to the largest, native population of lake sturgeon in the world, families flock to their ice shacks every year hoping to throw a steel spiked rod at an ancient fish. The past time is similar to that of deer hunting in Wisconsin and generation after generation hope to add to the lore and stories of their older family members’ success of spearing these giant fish. 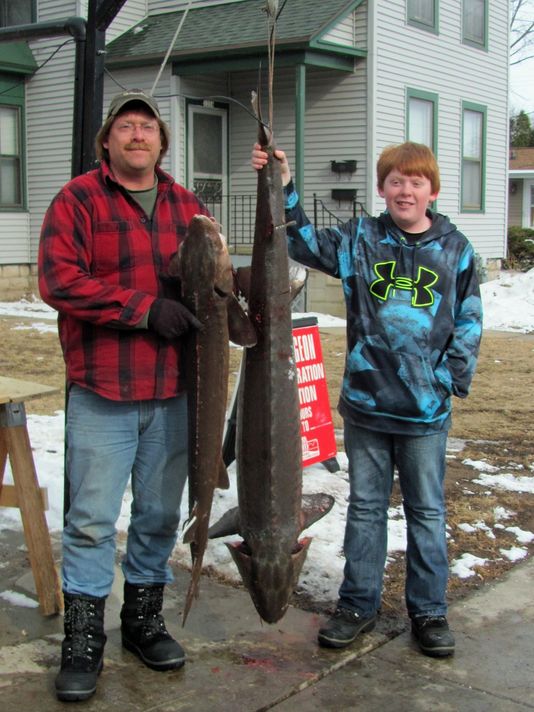 The father son duo of Derek and Robert Drexler both speared big sturgeons on the final day of the 2015 WI Sturgeon spearing season. Photo from Drexler Family

Saturday, February 21 was the eighth and final day of the 2015 season on Lake Winnebago. A family from Oshkosh, WI was able to create a lasting memory that day when a father and son registered fish together. The father, Robert Drexler, 44 and his son Derek, 12 were fishing in the same shack when Derek speared a 70-inch fish that weighed in at 76 pounds. Only a half hour later, Robert got his chance when he landed a 50-inch sturgeon that weighed 24 pounds.

This season produced many fish, but they were not as large as in years past. The biggest fish of the season was 81.3 inches long, but weighed only 137.5 pounds. The fish was speared by Chad Cherney and was registered at Payne’s Point Bar & Grill near Neenah, WI. You may think that this fish is still pretty big, but when this fish is compared to the top 11 heaviest sturgeon ever registered, it is longer than nine of them.

Sturgeon Not as Fat this Season

Why were the weights down on fish this season? The reason is that there was a drop in the shad population. Shad is a fatty food source for sturgeon and this meant that they were a bit skinnier this year. This won’t have any lasting effects on the fish though as the shad will bounce back and the fish will surely eat up.

Total numbers for the season ended at 911 adult female sturgeon speared on Lake Winnebago. This exceeded the cap by 33 fish, which is not an issue for the population. Many years, the cap is never reached but the good water clarity this season helped the spearers.

How the Sturgeon Spearing Numbers are Set

Each year, the cap is set to harvest 5% of the adult population of sturgeon on Lake Winnebago and that was met this year. It was a great sturgeon spearing season and with the last two years of excellent conditions, spearers are sure to be spoiled if things ever change!

Check out more of the latest outdoor news and fishing blogs.