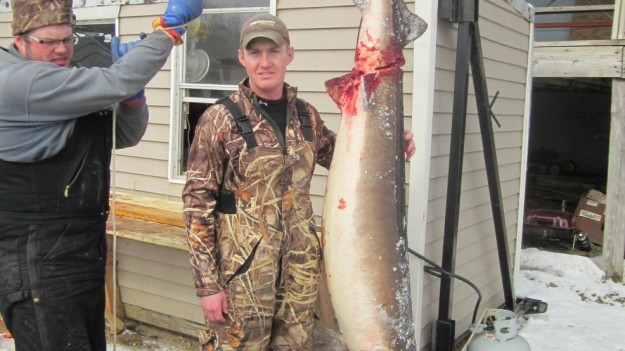 The tradition of sturgeon spearing is here on Lake Winnebago and the Winnebago system in the Fox Valley in Wisconsin. So far, the spearing has been somewhat slow, but some good news came yesterday to one spear fishermen. Daniel Bloesl speared the biggest fish that’s been taken in the past two years on Lake Poygan.

Daniel Bloesl registered a large female that was 77 inches long and weighed 147.9 pounds. He brought it into Indian Point Tavern on the West side of Lake Poygan. The DNR collected the fish’s eggs to count them and weighed those at 41.52 pounds! This accounted for 28.1 percent of it’s body weight and is an estimated 960,873 eggs.

Congratulations to Daniel on this awesome fish and hopefully we’ll be seeing some more this week.